Happy New Year! (or how we spent the first 17 hours of the new year)

So it’s 2012. We started the New Year the right way by getting to work on the bus. Our self imposed deadline was to get enough done to tailgate on the 2nd.  So we were cutting it pretty close.

You can see the electrical is pulled into the box at this point so we could get the back of the seat skinned. I wanted to get the transition stripping done so that we weren’t constantly breaking off more of the ikea flooring. Also I like transition stripping. I was too lazy to cut the stripping at an angle so I just cut the tops/bottoms to overlap enough to make me happy. Matt was peeved because I kept working on the transition stripping while he was measuring and cutting the insulation for the ceiling (which he wanted me to also do). 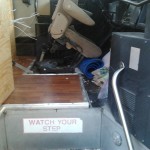 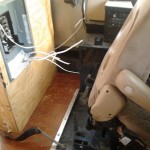 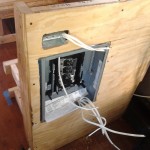 These pictures are slightly out of order, we actually started by painting the ceiling as well as the mid level sides/ceiling. We went with Gloss Almond for the ceiling and Gloss Black for the other parts. We wanted a light ceiling, but something that would be favorable and not show too many marks/dirt/dust whatever. Phil bought us a canopy! We have an oak tree in the back yard and it’s constantly dropping mounds and mounds of shit, and since we’re in Florida there’s Spanish moss all over it. Anyways, the canopy allowed us to paint a bunch of the stuff and keep it covered. We couldn’t figure out a way to paint the ceiling parts at the same time though, so we propped them up against the bus and the fence to try to keep them upright as possible so less crap would drop on it. 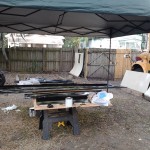 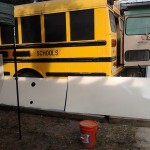 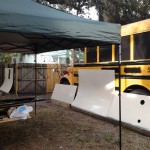 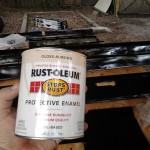 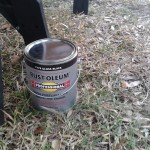 We ended up doing 2 coats on all of the parts. We had drawn on the ceiling originally with a big red permanent marker so we wouldn’t forget the order that the pieces were supposed to go up.  On the first coat, the red still showed through a lot.. fortunately 2nd coat was enough to cover. Phil and his friend Rob ended up helping us out with painting and some other stuff too.  We also put Jake to work cutting open the old seats to pull the auto foam out of there.  That stuff is way too expensive to throw away (also, the foam was protected very well by the original vinyl.. you’d think the seats would kinda smell after years of kids sitting in the seats doing whatever the hell it is that kids do). Anyways, after we got the first coats on the pieces we started to put the insulation up top. Glued it to the ceiling using liquid nails. Most of the pieces fit snugly and could have gotten away without the liquid nails, but all of the jostling from driving the bus would cause the insulation to sit on the ceiling pieces instead of against the roof. 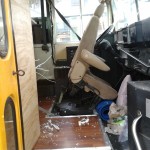 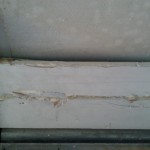 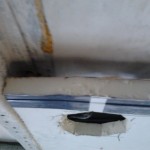 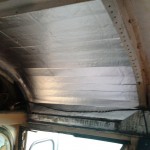 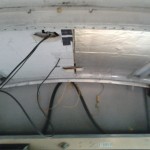 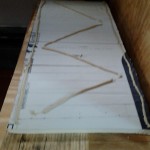 We did have a couple pieces that didn’t fit snugly, and I was a dumb ass originally and was holding them up waiting for the liquid nails to dry/stick enough. Then I realized that I have duct tape and didn’t care if the tape stayed up there. Bam. Duct taped the loose ones up and arms got to rest. 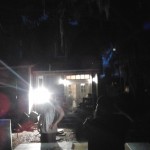 By the time we finished up with the insulation we were running out of light and we still hadn’t finished up the seats. Phil ended up putting on the 2nd coat while we were doing the insulation. That was a huge help, Jake and Rob finished cutting off the old vinyl on the seats too so we could get working on that. The effort from those 3 guys definitely made our goal possible. If not still a little improbable seeming from where we were standing. 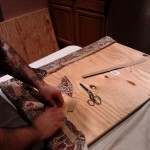 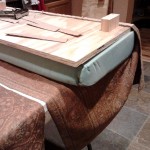 So, Matt and I had never done any upholstery work.. but we figured stretching fabric couldn’t be that hard, right? Right, and wrong. Our Grandpa David (our mother’s side) ran an upholstery business for years. I remember seeing rolls and rolls of vinyl and leather for seats and such. Big industrial strength sewing machines. Twine, all sorts of stuff. Their house was always a treasure trove of stuff when we were kids. Actually both of our Grandparent’s and their places were pretty amazing for their own reasons. I digress. We thought we were hot shit when we made the backs of the seats.  The foam was pretty thin so it was easy to stretch the fabric across it and make it look like we wanted.

On the seats.. it was a slightly different story. First of all, we went to one of 2 fabric stores that were open on New Years which fell on a Sunday. We looked at a bunch of different fabric and settled on different patterns for the backs and the seats.  A paisley for the backs and I don’t know how to describe the seats. Unfortunately for the seats.. we had grabbed the end of a roll and bought up every last inch of it, which ended up being.. 3 yards? Or 9 feet. We had just barely enough to get the job done.  Fortunately we were able to stretch it across the seats. I also discovered when stretching the fabric across, that there are probably some methods to hide creases and such. If I had thought about it enough I could have reinvented the wheel and figured out how to do it (or watched a youtube video).. instead we opted to just muscle it and make it look good enough for us. So around 2am we finished up the seats and got them put back in the bus. We also had installed the backs (screwed in with a washer in place to keep the screw head from going completely through the fabric). Winston is inspecting our work making sure it’s up to his high standards. 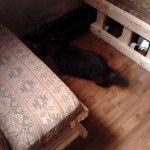 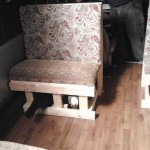 So. Seats are in and installed. You can actually sit down in the bus. It’s 2am. Shit. We’re supposed to tailgate tomorrow. No beer, no food, no ice. Took a much needed break and ran to the local Wally world to stock up (they sell alcohol until 3am here). Unfortunately (for us) the night still wasn’t done.  Matt really wanted to get the ceilings up.  I really didn’t want to put them up.. but we got it done.  There is 1 section that is pretty long.. it took all 4 of us muscling it up and trying to line it up with the existing holes. We managed. Also, on the largest section was also where the electrical from the lights was going to come out.. so we measured and drilled some holes.. then had the fun task of sliding the electrical through the holes. 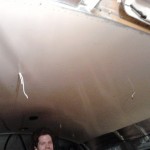 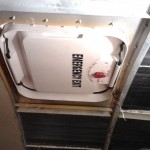 So the day started around 9am or 10am and ended around 3am or 3:30 am. In dire need of a shower after a day toiling on the bus.  Who’s ready for a beer? Big thanks to Rob, Phil, and Jacob for helping us make our deadline!

One response to “Happy New Year! (or how we spent the first 17 hours of the new year)”